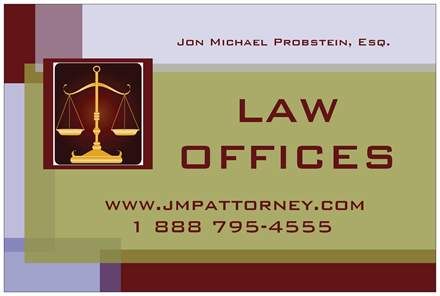 Since 1977, Jon Michael Probstein has been representing and assisting people and businesses in all matters, including public and private corporations, and his services have included public offerings, proxy fights, securities regulation, all phases of civil litigation, family law, estate law, guardianships, negotiation and drafting of a wide variety of agreements and transactions, in addition to general advice with regard to the customs and practices within various industries.
​In addition, in New York, he serves as a Part 137 Arbitrator on attorney/client fee disputes, as an Arbitrator in Small Claims Court and he is on the Arbitration Panel of the Eastern District Federal Court. He is also a Part 146 mediator for various New York courts as well as his private mediation practice in New York and Massachusetts.

Sponsors to NRNAmerica.com are chosen based on their involvement and general support of the National Referral Network and they may waive fees for some members. NRNAmerica.com and Protection Point Advisors do have some shared ownership, however, membership with PPA is not required and NRNAmerica.com seeks to provide value to all its members.